After a little convincing Rasmus agreed to make the 300 km detour into the Shark Bay Peninsula. We wanted to see some dolphins! As it was quite a drive in we stopped at one of the free camping spots for the night. There are 4 of them as you drive into Monkey Mia and if you ring up the council for a permit you can stay for one night. We chose Whalebone Beach (recommended by the Marsh family)
Great choice too! What a spot! Right next to the water, and I mean only a couple of meters. It was so lovely. 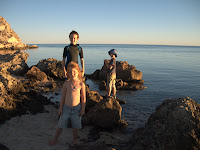 The water was flat and easy for the kids to explore. They soon donned their snorkeling gear and made sweeps of the area on the look out for treasure. There was also a bit of sand to dig around in which kept them occupied for many hours.
Our day ended enjoying a quiet sunset at the water's edge.
After the sun rose we headed off to spend 3 nights at the Monkey Mia Resort which was rather a special treat. It's a bit expensive but quite frankly they have you over a barrel as there isn't any other choice.
It was quite hot when we were setting up so to get the kids out of the way I took them for a quick wander along the very nearby beach. We spotted a jetty and headed in that direction. While the kids were looking to add to their growing accumulation of sea side stuff I chatted to a lady who said they were waiting for the dolphins to arrive for their 3rd and final feeding of the day. If they didn't come by noon it wouldn't happen at all.
Me and the kids continued to wander as I thought we would catch the dolphin show the next day when Rasmus and his camera where around. Up on the jetty Ben was excited to see several large fish hanging around darting under the jetty and back again.

Suddenly, we saw dolphins!! They were right there at the jetty! Everybody had waited on the beach and we had struck gold when the dolphins came to us.
It was a real sight to see them so close. A pod of about 5. I was very conscience that neither Rasmus nor his camera were here to capture the event but I wasn't leaving to fetch him for anything! By now others had joined us and we were all ooh-ing and aah-hing over the sweet water creatures.
Eventually the Monkey-Mia-dolphin-food-bucket-holder arrived and we got the do's and don'ts of what to do around the dolphins.

Standing in a line in the shallows we waited for the playful dolphins to come for a feed. Only 3 people get chosen to hand over a fish and guess what??? Molly and Kasper were team number 1. And coz I was standing with them I also had to help. Apparently it takes 3 from our family to hand over a fish whilst others only had 1 member. Hmm......
Rasmus had turned up by now too and took the required photographic evidence.
We had a really fun time at this resort and were really lucky with what we saw.
Ben was so happy to see Lion fish on several occasions, we swam with sea turtles and Rasmus and Molly had dolphins swirling around them at one stage.
At the resort itself a family of emus roam the place looking for stuff to eat. As I was holed up in the caravan with my dastardly assignment, I was often dashing outside to rescue something that the kids had left lying around.
Hard up for TV my children loved to sit in a darkened room watching episodes of The Blue Planet. In fact, sometimes we had to drag them outside to see the actual things they were watching on the film!!! Kids heh! 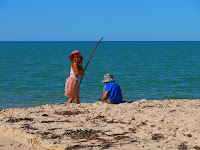 We did manage walks on the beach and snorkeling in the ocean and...trumpets please....the end of Assignment 1. Hip Hip Hooray. We even had a little party to celebrate the event.
On the way out of the resort and on to our final overnight camp at Sharks Bay, we stopped for lunch to see a most magnificent blue lagoon. It was so inviting. I could of just jumped into the blueness except I was trying to avert tears of disappointment of a level unseen on the Richter scale.
Ben had been very keen to see some sharks while we were at Sharks Bay but they not been as keen to see him. We had agreed to let him go out on an early morning boat that the resort organised but they cancelled due to windy weather. So, we had tears. Lots of them.
In my job as mediator (for which I get paid bucks!) I rang the local Ocean Park and arranged for Ben to pop in and see their sharks. Free of charge! I know, you don't have to say it. I'm amazing.
Needless to say I missed out on jumping into the Blue lagoon but I had put a big smile on my boy and that was worth it.
So, after lunch off we went.
The others stayed behind with the van while I took Ben into the Park and we meet the manager. Ben went off with him and I waited in the foyer. I could see Ben following, listening and asking a million questions and an hour later he returned full of smiles and feeling much better about the world. Yes, you can say it again, I'm amazing.
We hit the trail again to find our camp spot for the night. We were going to do another freebie even though you are only allowed to do 1 per week on the Sharks Bay Peninsula.. We're rebellious like that.
Finally arriving about 4.30 we set up camp and Rasmus began to make dinner. I suddenly remembered that we hadn't rung the council for a permit (for the free camp) so was in the process of doing that when the Ranger pulled up in his car.
“Hi.” I said, “I was just going to call you for our permit.”
“I'm sorry.” he answered, “ there aren't any permits left. You'll have to leave.”
“Huh!!?? But I've got young kids and we are eating dinner and.....”
“Sorry, you will have to pack up and leave.”
There was no persuading him and he went on to ask another van to leave too.
Rasmus insisted that we stay and eat dinner first which was good foresight on his behalf as it went on
to be a long night.
Driving out of the campground we remembered that we hadn't seen Shell Beach yet, that was going to done tomorrow.
Oh well, we will have to see it in the dark!!!
So we did!
Lucky for us it was a full moon so seeing the endless meters of tiny white shells was not as difficult as it might have been on another night. We walked over the shell dunes and down to the water's edge picking up handfuls of the shells and reading the messages written by other visitors. It was actually a pretty cool evening (and by cool I mean coool, not chilly).
We put the kids into their pjs and snuggled them into the car as we were not really sure where we were going next.
By the time we had reached the end of the Peninsula they were asleep and we needed petrol. Pulling up to the bowser we noticed another car who had locked their keys in. And left their lights on!! The petrol station guy was of no help but eventually we got them out and on we went.
It was 9pm before we found a suitable place to pull over for the evening. We popped the kids into their beds and then sat back to breathe the night air.
Another adventure complete.