After the weigh-in we left Colac and made it to a lovely park called Wannon. It was in the middle of a bushy area and there was nobody around! 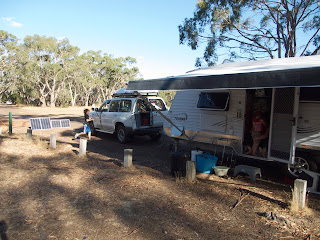 We set up camp next to the covered picnic area which housed a couple of fire pits and to my delight a stone oven!!! Me and Karen starting fantasying about all the dreamy meals we could cook in it- roasts, bread, pizza.... However, to our dismay we discovered we were only allowed to stay for 24 hours!!! Just when we thought we might be able to sneak in an extra night a spy came past to check us out :o( 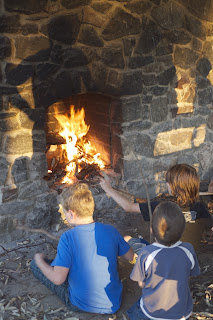 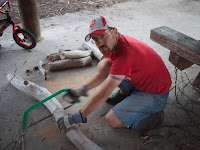 We had our fire that night thanks to my hubby, who loves nothing more simpler than boiling his billy over a naked flame. The kids had bubbly, blackened marshmallows and went to bed with sticky fingers and a smile on their faces.
That magical oven was not going to be left unused and in the morning Rasmus was up early to fire it up. I had made some dough the night before and when the oven was hot enough in it went ! It came out ½ hour late a lip smacking, delicious loaf of goodness. 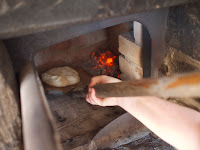 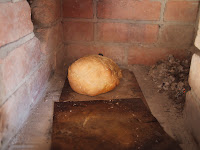 After the kids had finished their school work, which they completed in their bush surroundings, we dug into the loaves with lashings of butter and jam- I couldn't imagine a more perfect morning tea. 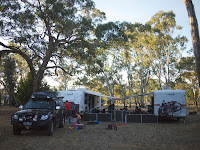 Cherrypool was our next stop. It was a bush camp set off the highway between Hamilton and Horsham next to a river.
For the first time we set up our caravans with a shared living space, joining our two awnings together-very huggelig. It was quite warm so we had lots of shade.
We spent our time relaxing and drinking a few icy cold beers. The kids did their school work of course-in between getting the coldies :o) 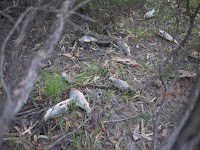 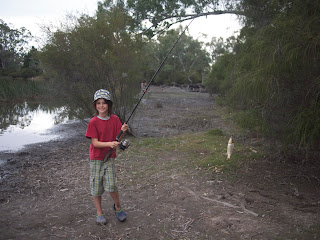 Occasionally the children wanted more from their holiday and we were forced to venture outside into the nature (which, I conceed, was very pretty). Ben talked the odd few into coming with him to fish down at the river. Unfortunelty there was only Carp to be caught but they learnt the art of banging the said Carp on the head with a big stick and throwing it into the bushes. Wouldn't learn that in school would you?
On another day we decided to check out a bit of our Native Australian history as we had been talking about Australia's pre-invasion heritage with the kids. They were quite fasinated with the image of the Aborigines going walkabout and foraging for their food and water amongst the harsh landscape. So we went for a hour return trip hike in the Grampians to visit the Billimina shelter. Here we found there was some Aborginal cave paintings from many years ago. 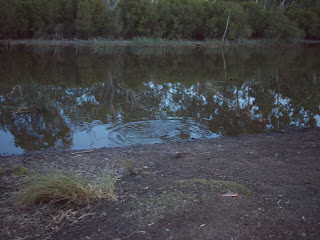 As dusk was settling in Rasmus decided one evening to venture out for small walk to take in the nocturnal sounds, while doing the laundry. He came back very excited as he reported to have seen not one but three platypuses swimming in the river! We were all very happy for him and thought it only fair that the 'foreigner' got to see the elusive mammels even though we were a bit jealous-lucky him!!

The next night me, Karen and Rasmus wanted to try his luck again. When we arrived at the river's edge we immediatley saw the same ripples that Rasmus had seen the night before. Wow!! How amazing we all thought.

A few minutes later we thought we saw one of them coming up to the river's bank. We were holding our breathes! Here it comes....a rat....a water rat??? Confusion and disappointment. And fear from Karen as her rat phobia kicks in and she runs away.

Then we turn and see the sculpture which had been carved from a fallen log-it was a Water Rat! Apparently everybody knew about them except for us, and an embarrassed Rasmus.
Vis Cherrypool - where we were på et større port 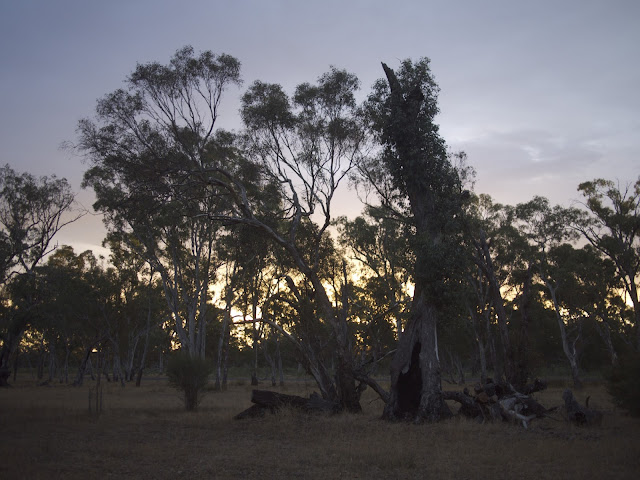