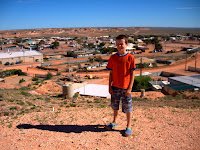 What can I say about this town but to admit that I must have the only 9 year old in Australia who would like to have a summer house there!!! 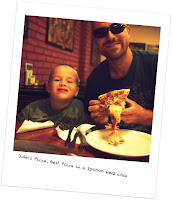 Of all the places in Australis he wants it here? Nobody tell me I don't have an incredibly imaginative child who just happens to be a square peg in a round hole kind of world :o)
I guess it was kinda interesting. Opals just aren't my thing. Much to the dismay of Ben. He just couldn't understand why I didn't love them as much as him.
Kasper and Molly took up the cause though and tried to have the same passion even if it was in a diluted form.
We did the rounds of just about every opal shop, tried the 'award winning' pizza and stayed a little longer on leaving day to visit SA's No. 1 tourist attraction, “ The Old Timer's Mine”.
We met a lovely Croatian man who the kids took a liking to. He was very friendly and gave them pieces of 'opal' he had lying around his shop.
These lumps were added to the already growing pile of what we now know as potch- completely worthless but opal none-the-less.
We chose to stay at a campground were we could sleep underground!! You could pitch your tent in one of the rooms which they had extivated from the rock and enjoy the coolness after a hot, sunny day over head. Problem for us was that the ground was stinking hard we couldn't bang a peg in to save ourselves. No worries, we can just pop our stretches up and sleep au natural. Small problem again- mossies!! Buzzing around your head like a lawn mower all night and, although not an issue for me, spend part of their night sucking your blood!

Solution- $75 worth of trendsetting army green hats with nets attached and a dose of mossie repellent applied each night. But we slept underground like the miners do!!
The camping-ground also had a mine which you could do a tour of so on our second night we donned our hats and learnt all about how to dig for opals.
After a miner has burrowed his way through rock and dirt looking for his opal he is left with huge piles of the leftover debris. It is in this pile that tourists begin an activity known as noodling; scratching and sifting through the rocks and pebbles on the lookout for an elusive opal.
For the most part the mounds are full of potch but if you are patient and lucky you may find the odd bit of colour too.
Taking a break from the dusty town we drove north towards The Breakaways; a group of beautifully coloured rock formations.
As we drove out we met up with the Dog Fence. 5600Kms of wire erected to keep the dogs out of the sheep country of the south. It was quite amazing to imagine how long the fence actually was. When we got out on the north side to do the obligatory photographs Ben was so nervous that we would be attacked by some roaming dingo he wanted us to hurry up and get back into the car. Funny kid.
The Breakaways themselves were a spectacular site.. So named as they appear, from a distance, to be a 'breakaway' from the Flinder's Ranges. It is a site that is special to the aborigines and they had described several of the stories attached to particular hills, such as the two dogs, which was very interesting.
Despite having showers on a daily basis I was hot, sticky and dusty for a great deal of my time in Coober Pedy and was looking forward to seeing a patch of green grass. Nobody else in the family seemed to mind how uncomfortable it was so maybe it was just a mummy thing :o) 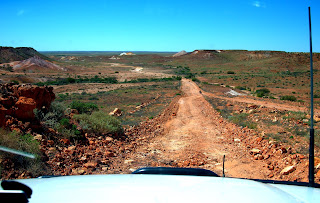 Driving down dirt roads in the Breakaways 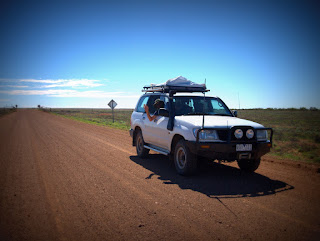 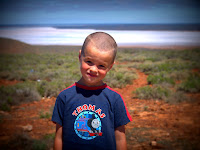 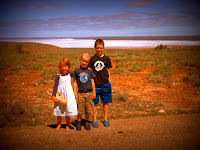 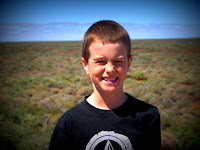 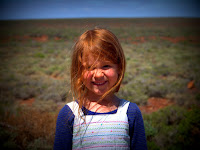