I had really wanted to visit Hahndorf as I had been here as a child and was looking forward to revisiting my childhood memories. Problem was I didn't recognise a thing! What had they done to the place? Or perhaps it was that my childhood was further into my past than I cared to admit!

So, it was to a new town we would all explore together.

First things first though. The 17th March means more to us than just St Paddy's Day. Our little princess has a birthday- and we celebrated her 5th this year. Imagine only 5 years ago this little treasure come into all of our lives. We helped to begin the celebrations with a few pressies and her favourite brekkie-hasbrowns and bacon. Then a trip into the quaint little town.
Amazingly, the first shop we came to was an op-shop; our fav.
We found Molly 2 little dresses (coz she doesn't have enough of those) and some hand knitted doll's clothes to add to her birthday collection. 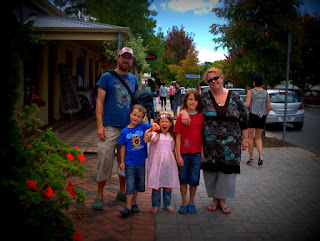 We wandered from each shop to the next imagining all the things we would buy and reminding the children (on a fairly regularly basis) about the joys of windowing shop.
The highlight for them was the lolly shop as finally they got a 'yes' from us and set to task in choosing from the huge range. Much discussion was had as well as toing and froing between the bright coloured bags. Finally decisions were made. Ben settle on a box of jelly beans he'd had his eye on for weeks but was very disappointed and we came close to tears.(I gave him my fudge to compensate coz that's the sort of mother I am) Molly has taken several licking sessions to finish off her love heart lolly-pop. Kasper eats his all a once. Funny kids.
We bought lunch in a German inspired deli and sat outside to enjoy our picnic and Molly's birthday lunch. We watched as others tucked into huge platters of sausage, potatoes, sauerkraut and the hugest glasses of German beer you have ever seen. Rasmus and I had a small :oP 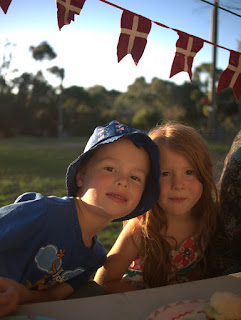 Molly was also allowed to choose another gift and although she had been talking about getting a tu-tu (for the ballet practice) there were no such shops in Hahndorf, so she settled on a handbag.


Later that night we had Molly's party with bowls of chips, pink biscuits and home-made mini burgers. Topped of with a pink cream birthday cake.


She claimed it was the best birthday ever which is always nice to hear.
The next day Rasmus was taking the kids to the Adelaide museum and I was to remain home to study-lucky me :o)
Did you know that on the bus in SA you can get 2 free kids ticket with an adult and under 5 travel free? Rasmus' bright idea was to give the boys the free tickets and say that Molly was 4, so she could also travel for free. Are you out of your mind? Did you know that she had turned 5 the day before!!! She wasn't telling anybody that she was 4 even if it did mean a free ticket. So in they trouped together.

As Julie can't do any reporting, since she stayed behind, I take over for now.
Adelaide is one on those cool cities where public transports timetables are integrated into Google Maps so finding your way around is super easy. Trip was forty-eight minutes; first through hills and then freeway downhill; 600 to 50 meters above sea in 4 km. Going to be interesting with the caravan in a few days!

View Larger Map
Adelaide was abuzz with Lycra Lizards as some kind of bicycle event was on. In the hills the bus driver was challenged by them every 10 meters.

We grabbed a few freebees like hot cross buns and energy drinks as the bus stopped right where the whole event was finishing - it saved our snacks for Ron and Arthur.
Our quest was to find the Museum where Benjamin had heard about an octopus on display that was four stories high. 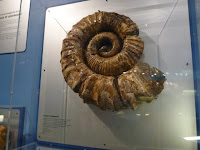 It turned out to be the South Australia Museum and at first glace it looked terrific. It turned out to be the best one I've even been to, IMO, and, as a bonus, it is free.
We spent almost 3 hours looking at the displays and then had a very late lunch.
Judging by the children's lack of asking for food the whole time in there, I think the kids enjoyed it a lot.
I also managed to get hold of a an Aboriginal map of Australia's pre-invasion tribal division-it's fascinating!
We had a stroll down the main shopping mall which also seemed a lot more appealing than the equivalent one in Melbournesia.
Molly had what it seemed to be her first encounter with an escalator and couldn't get herself to take the first step onto it.

Had my first hands-on look at a Kindle Touch, and are now happy it came later to the Australian market as it is so clumsy because of it's increased thickness and weight.
Kids had a play in a park before the bus ride home.
Once home, we had a dip in the pool and bbq for tea and Benjamin played Minecraft online with Anton


View Rapid Bay to Hahndorf and places we were in a larger map
Posted by Unknown at 12:08 AM