We wound our way through some pretty country side on our way to our next stopover -another quirky campground next to the sea .
At one time we drove down a particularly steep road and wondered how we would pull off driving back up it again!! Slowly was my guess.
As we rounded the bend we arrived at our destination and saw the beautiful water and a jetty protruding out into the blueness.
The campground was so lovely with lots of green grass and tall trees. Just how I liked a camp site; another little bit of paradise.
Best of all we spotted our new friends from Kallista. They had only arrived a couple of hours before us! We set up camp along side of them and caught up with what we had done for the last weeks since seeing them.
It was nice for our kids to have some new play mates as they were all about the same age.
The 7 of them spent lots of time together running around like mad monkeys enjoying each others company.
The fishing rods came out-but continued their run of bad luck, despite numerous trips out to the jetty.


One afternoon, while I was sitting outside and studying, the camp host came over to me and mentioned that he could see several people on the cliff face. As Rasmus had taken the kids for a walk to a cave not far away I decided I had better take some interest. The host had his binoculars and showed me 4 people above the cave opening. 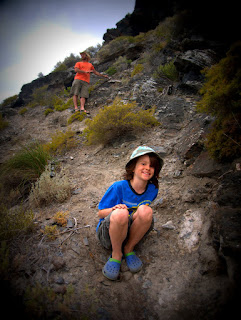 Yes, I confirmed, that was my husband, our friend and our respective eldest sons. Then I was told an alarming story about past hikers who had attempted a similar feat and gotten stuck. The emergency services had had to be called who brought in helicopters to retrieve them!! Oh Dear!!
Fortunately, that was not the case for our intrepid explorers and everybody came home safely unaware of the excitement they had stirred in our camp host's life.


It was nice to be back in Rapid Bay to some relative home comforts after the roughness of a weeks worth of tent living. We had planned to stay only for the night and move straight on to Adelaide but for the life of me we could not find a caravan park- and we weren't even looking for a cheapie this time!! What was going on in the state's capital that we didn't know about?


Ben tok advantage of the extra time and spent 6 hours on the jetty trying to catch a squid!!! He spoke to just about every fisherman on there and even managed to score some bait and hooks to try his luck at fish too.

The guys thought Ben was so adorable and should think about a stage career! He just would not stop talking to them-doesn't sound like a child of mine!!!


They caught lots of these little fish which they didn't know the name of but nicknamed 'the Ben' in his honour.
Unfortunately, Ben didn't catch anything and was quite devastated. He had been so determined to get us our dinner. Poor little blossom, there will be a next time.
Finally, after many phone calls we landed a caravan spot in our price range and tucked up the van and our things to make tracks to Hahndorf-land of the Bratwurst sausage! 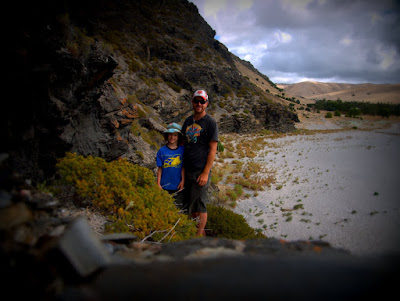