March 27th Edenhope - After our week at Halls Gap we headed off west and found this lovely little town for an overnight stay.

We had originally been looking for a free camp on the outskirts but it must haven been a really small one coz we completely missed it and suddenly we were IN the town-as small as it was. I had heard you could sometimes camp at the show grounds of some towns and as we saw a sign pointing to one decided to check it out.
The man at the information office said it was ok so we headed back out there (but not before I bought some lovely eggs from Debbie’s chooks!).
Edenhope had a really feel to it and I really enjoyed staying at the show grounds It was so peaceful.
We only stayed the night but we had Debbie's eggs as a reminder of our little stay :o)

Robe was our first stop [look] in South Australia. It had a nice beach and it had a little rocky island. I found lots of shells and it had a cliff but my favourite part was with all the crabs, there was a walk way to get to them.
There was a nice library where we parked our caravan and our car next to. We had lunch there as well.
Then we were on the road again [to Wrights Bay] .
Wright's Bay was pretty cool 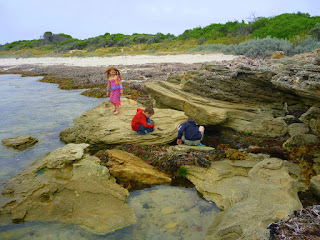 There were lots of fish, the best ones were probably the Cowfish ,they had lots of colours.
There were flounders and toadfish and I even saw some octopus eggs.
I don't know if this place/beach would be called a rock pool or not because it has the rock bit covered but not the pool bit-haha.
We met some people, Miki, Hadas, Milli, Noam, Zohar and Ness, and what a coincidence they live only 5 mins away from us in Kallista .
Anyway, their car got stuck in the sand one night and dad went to help them get free.
Three days later when we tried to use our car it didn't work! The disk break got a tiny bit of rust on it from being on the salty sand [don't worry Chris, it's all good now]
Isn't that a dandy.
- BBF

Meningie 4th-5th March
After driving for several hours we decided to pull over for the night and found a campground outlined in our camping book.
However, it was a weird set up! We found a track and veered off to the left from the highway we had been driving on. 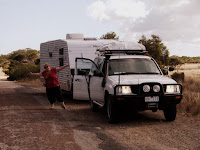 We drove on for a few minutes looking for the spot to park when we realised that we were actually on there already! No campground, just the track!!
New experience for me but as a 6 week old seasoned camper I thought I had better start rolling with the punches.
The bull ants were another thing! We noticed them when we got out of the car. The ground was crawling with them.
As we had been rolling back and forth trying to find a level spot we had disturbed a nest and they had come out in their 100's-maybe 1000's- to see what all the commotion was about.
We instructed the kids to keep their shoes on-yes, you too Molly- and stay down the fire ant-less end of the van.
Excellent parenting job done-now to make dinner.
While I was doing that Rasmus and Ben jumped the fence into someone's 1 million acre property and went exploring. I saw them jumping up and down at one stage and later when I asked them what they were doing they explained that they had found another fire ant nest and were making a kerfuffle, or is that a hoo-ha?-to bring them all out again. Parenting job now called into question.