Rest stop before Albany
A wee overnight stop where Rasmus took the kids for a bush walk and Ben chatted with his friend Austin. 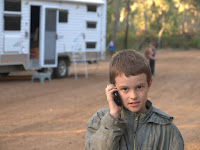 Apparently I never left the van.
Must have been too busy cooking delicious meals for my ravenous loved ones :o)
In the morning we began the drive towards Albany and then promptly drove straight through it!
We had bigger fish to fry- and look at.
Mum had told us about this old whaling station which was now a historical tourist hot spot. So onwards we drove, past the $3 for 5kg strawberry sign (yes, I am still annoyed HE wouldn't turn around!), eventually veering left to drive down a small peninsula.
On our way to the whales we stopped off at the local Blowhole.

Parking the car we had our first emergency family meeting. After being on the road for 3 months and in each other's space 24/7 things had become more and more heated between the kids and I was becoming very tired of being referee and judge.
“Shall we go home?” said I very sadly.
But everyone agreed they did not want to go home and would try to look after each other better.
Good, catastrophe averted.


We began the 1 km trek downhill towards the blowhole. My only thought now was how steep we were going down hill what it would be like on the way back!!!
Oh, and of course the views were great too!!
Climbing over rocks and boulders we finally came to the celebrated blowhole.
The water was pretty calm so no water sprayed up from the crack in the rocks but Rasmus and the kids could stand on the area and feel the power of the water as it surged under them. It was a very extraordinary experience for them....until the underground force had built up so much that trapped air exploded with the loudest bang scaring the children out of their socks! The boys jumped away giggling nervously but vowed not to go back for Rasmus' forgotten photo opportunity. Molly ran crying from the scene and needed to be reassured for some time before she could settle down.
Poor babies!
But now poor me as we begun the hike back up to the car. All in a day's fun.


On further we drove at last coming to our destination.
Whale World was the last operating whale ship in Australia and finally closed on 21st November 1978. Now it is made up of an interactive museum where you can find out how a whaler's life was experienced.
I found it quite fascinating as we wandered from site to site with our tour guide recounting the different processes involved in the capture, slaughter and then dismemberment of our largest mammal relative.
It was fascinating but at the same time confronting and repulsive.
They also had cinemas, which was the kids favourite part, which helped to give us a fuller picture of what went down on that bit of the coast.
After getting our money's worth on whale info we managed to corral the kids through the exit and gift shop without buying anything!
A successful day :o)

24th to 26th
Cosy Corner
It was getting on in the afternoon so we headed towards the night's camping-spot and in our camping book we found a lovely area called Cosy Corner. How could we resist.
It is always a bit risky arriving at camp spots late in the afternoon as it is possible all the places are gone. And with such a big van as ours it becomes even more speculative. So, as we approached the campground we were a bit apprehensive.
Sure enough the place was pretty full with campers but as we were only going to stay overnight we drove up close to the side of the road and shared the space with the flora that was growing there.
Molly wasn't long in the park before she spotted some kids so she was off annoying somebody else's family for a change :o)
Kasper followed after her coz it looked like she was actually having some fun and Ben hung around home asking for some computer time-or perhaps it would be more appropriate to describe it as nagging ;o)
But on rethinking (or perhaps because his parents said no) he wandered down to have a look at the sea and beach which was right next door to us.
Rasmus and I eventually wandered to see who they were actually playing with-being the responsible parents we are- and met up with some other mums and dads. We had a nice time chatting until it was time to do the usual dinner time routine-people must eat, even on fabulously exciting holidays around Australia.
That night, after the kids had gone to bed and were asleep we decided to stay an extra day and night. We thought the boys could get some neglected study done and we could have a swim at the beach, it had looked so lovely.
So that is what we did!
We also continued our “getting to know you” routine with the kid's little friends and Rasmus and the youngsters enjoyed a wild romp in the surf, jumping over the frothy waves.
Another day in paradise completed :o)


View Albany in a larger map