The next morning, before we left Cosy Corner, we celebrated the birth of my second baby.
Hurra. Hurra. Kasper turned seven years old and we lined up to give him a few presents we had collected along our journey so far. He was smiling from ear to ear, which is always how a parent loves to see their child and it looks particularly good on my toothless little man :o)
Kasper had lined up the day's menu so we begun with his requested bacon and eggs-always a good choice- and then hit the road for the next chapter in our gap year.
After the scrubby flora of the coastline we had been following for a lot of our journey it was a real buzz to drive in amongst the old, tall trees of Denmark.
I loved it here straight away.

It reminded me of home.
We first came into the town and parked next to a lush green area which had a playground and a wonderful river flowing along side.
We hit the shopping area and first dove into a book shop. I usually feel a bit embarrassed, uncomfortable and awkward in these places as the kids just love them and commonly sit themselves down on the floor and begin to read as if we were in a library. They are oblivious to the sideways glances of the sales staff and of their “be careful of the spines” and “don't bend the pages back” comments they make as they take one book after another from the shelves. But I'm not! I find myself hurrying the kids along and shuffling them out the door as soon as I can without making them feel too deprived of a good read. 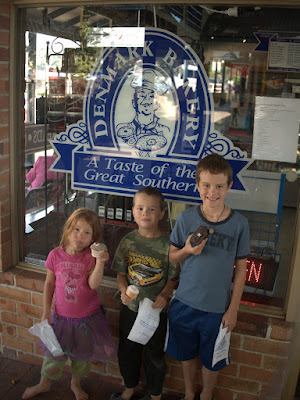 A few doors down we found a second hand book seller and later on an op-shop. Now my little book worms can read and bend the spines on their books to their hearts content without feeling the steely gaze of a shop keeper on their backs :o)
I was rather relieved as we had earlier walked past a bakery that had claimed many prizes for its wares and I am a sucker for a bread shop, especially one that has blue ribbons on its windows. While Rasmus and I sampled their pies luckily for the kids they could still have their hot chips as they sold them too! We finished off with sweet cakes to share-very yum.Eventually, even a cracker of a book cannot contain the grumblings of a tummy and so we went on the lookout for food. Kasper had asked for fish and chips for lunch but can you believe that no such shop exists in Denmark, how strange.
Denmark seemed a town well versed in their environmental concerns as they had many nods in that direction. We went to a shop which sold lots of stuff information regarding how to care for our world and Kasper selected a book about bugs for his birthday which he was super glad for.
After we had done the rounds of the shops we headed back to the car and the grassy lawns.

Everybody's wishes were fulfilled here. Molly could have her fun on the swings while the boys grabbed their nets and tried to find out what was drifting by in the river's currents and mummy and daddy sat back and watched them.
Soon though we were on the road again towards the camp ground we had chosen.
Parry's Beach was about 30kms out of Denmark but had a budget price which suited us. That and the beach the camping ground sat next too.
However, on arriving we became a bit nervous coz a big sign said that no caravans about 3m could enter the park and to support this they had a large metal pole suspended above the entrance, presumably at the 3m level, preventing anyone taller gaining entry.
I got out and went to have a talk with the caretaker who was quite the character. Despite being all hunched over and bent in the middle she was not a woman to mess with.
After having a chat with her and reassuring her that our van was not more than 3m her parting words were, “Don't you dare cut my trees.” “Of course not”, I assured her.
~Later, during our stay we, would hear her driving around the park on her quad bike or shouting at her husband to hurry up and do a particular job. It was cute.~
We decided to chance the 3m clearance and closed our eyes as we drove under the metal pole.
We made it with ease, which suggest that their 3m ruler might be a bit out.
Having wandered the park to see if there were spots available for us a family who were parked near the entrance said that we could share their space and so we squeezed in next to them.
We introduced ourselves to our new neighbours and as they also had 3 kids we spent a bit of time during our stay getting to know each other.
For the two nights we were bordered each other we shared their campfire and when Kasper's birthday cake, homemade mint ice cream, came out, we shared that too. 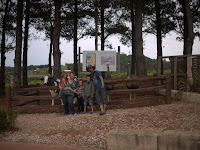 On the drive out to the campground we had noticed lots of places to visit. Foodie places.
It was with this in mind that we set out the following day.
As we came to the Cheese Factory my intention was to enlighten the children on the finer art of cheese making however, it turns out the place was a merely a front for selling cheese and other deli style food stuff. Oh well! We tasted the cheeses on offer and bought some yummy things for lunch the next day.

Other stops included
~Cider Making where they did not have the making of said cider on view to the public. We tasted the cider and settle on chilli for Rasmus and an apple for me- that will go nice with lunch tomorrow.
~A honey producer who had one hive of bees sandwiched between to plates of glass for you to look at while the rest of the shop was filled with bee costumes, bee games and other bee paraphernalia. We enjoyed tasting the honey pots though.
~An Ugg boot lady who sold the most amazing colours, but not in my size.
~A veggie stand which sold some lovely produce that you paid with via the honour system.
We also attempted to visit the alpaca zoo but as we pulled up it began to rain so we decided to give it a miss. Molly was not at all happy with this decision and planted herself firmly refusing to move. Being the natural parent that I am I said, “If you don't get in the car now we will go without you.” Molly didn't care so we started to drive off. Her reaction to this was to sit down on the ground!
In the end we chickened out of our threat and I went to carry the sobbing mess back.
Day two of our stay involved lots of sitting around doing not much at all as the rain pitter pattered down. We suggested to the boys that we do some school work but as it was Saturday they politely refused! How did they know what day it was?? I never do!
Instead we donned coats and walked on the rocks at the beach.
On our last day the sun came out briefly enough for us to attempt a spot of snorkeling Of course when I say “us” I mean Rasmus and the kids :o)
We drove to a place called the Green Pools which was well known for its top snorkeling spots.
The rain started up again when we arrived so Kasper pulled out of the diving party and headed back to the car with me. I was supposed to be studying but couldn't get any connection so the two of us read our Kindles sitting in the dry car.
Rasmus assures me though that a nearby reef made the water very calm and schools of fish were easily spotted amongst great tall rocks which stood in the water.
When they returned from their snorkel the sun turned out enough for me and Kasper to agree to a spot of fresh air with the others.
We went for a terrific walk down to the beach again to view these amazing huge boulders sitting in the water called The Elephant Rocks. They were quite a sight. 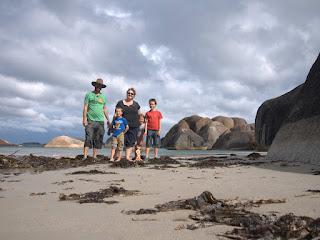 We continued to wander amongst them getting close up views and managing to discover a small, seemingly unchartered, area of white sand and clear water. I felt a little like Robinson Crusoe stranded on a deserted island. I would have felt more like him too if it wasn't for those pesky tourists that kept popping up all over my inaccessible beach!
That night, back at the van, with the neighbours having moved on, Rasmus made our own campfire and we cooked baked potatoes in the coals. Heavenly.