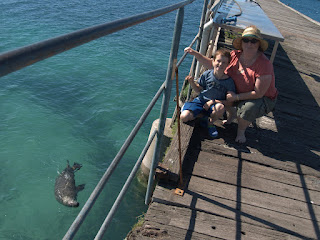 We headed back into town to top up the shopping and water before heading off to the next National Park. As we hadn't had much of a look around when we arrived the first time we decided to do that now so headed off, naturally, to the beach and pier :o)
The beach was lovely soft sand but lots of seaweed which we had to go across at some stages.
Once at the pier we were greeted by a seal!! It was so sweet. We had noticed a statue of Sammy the seal at the start of the pier but I thought it was merely a fundraiser as they had a collection box at his flippers.
But sure enough- there he was in the flesh. We kept dashing from one side of the jetty to the other as Sammy darted underneath us- it was lovely.
Ben meet some young kids fishing at the end of the pier and secretly imagined it was him I think. He rattled on and on with questions and chatter as is his style :o)
After we got back from our beach walk we had banana milk and chilli corn chips sitting on the nature strip under the shady trees - quite a blissful way to pass some time.
With all our jobs done we finally make a move to our camp spot for the night, back to the over flow area at Esperance Footy Oval where it was a bit cheaper than the caravan park.
The sun gets up about 7ish at this part of the world so after the kids had made their regular migratory transit from their beds to ours and woken us up the only way kids know how to-noisily-we all slowly made a move to get up and get ready to move on.
About 7.30am we had a knock at our door!
How weird!
Nobody was out of their pj's yet but as I was closest to the door I answered it, adorned in my flanney nightie and fluffy morning hair.
It was the park ranger. Apparently we weren't allowed to park there and the overflow area only applied to xmas and new year holidays-oops.
We made our apologies and promised to move along as quickly as we could-after breaky of course!
The extra bonus-other than getting an early start to the day, was that we didn't have to pay the $27 they usually charge for the privilege of using their oval.

I even imagined having one of the pit toilets at my house! There had been a fire through the area some years before so the campground was only a few years old. Beautifully combed camping bays and freshly oiled wooden doors on the loos. Amazing wooden doors. Too good for out in the middle of a National Park. We weren't used to such grandeur, and Molly thought the toilets smelled like cucumber. Which is a huge plus after some of the toilets we have used.


The inlet, which the camping ground lay next too- hence the name, did not invoke one to dive in and spend hours swimming. Not only was the water was very salty, as it's only open to the sea when it floods, it also didn't look very inviting.

But we can't blame our lack of swimming totally on the outward appearance of the inlet. It also rained like there was no tomorrow.
Rasmus managed to collect about 50 liters of rain water which spilled from the corner of the awning. He used this precious commodity to do the masses of laundry which stubbornly and continually accumulates.


So, we were pretty much holed up for a day or two. We kept busy doing school work, having sing-a-longs, playing charades and hugging each other a lot. Who are we kidding, we didn't do any school work :o)

At one stage the weather cleared for a bit so we thought we might get some fresh air and managed a bush walk. It was a guided walk where we were informed about the amazing flora of the area, including the long lost Cycad tree. It was fascinating. Apparently they are not to be eaten, although they are very tasty, unless they go through a cleansing process. This was information which the early settlers did not know about but the local aborigines did. Guess who got the bad stomach cramps?


Rasmus and Ben had a go at fishing again but between the rain and the incredibly bad luck we have with fishing they didn't get a bite between them. Oh well, there is always the next fishing hole.