We had quite an exciting episode during the trip out to our next camp spot. We were coming down the highway and drove through a small dip, as we came up the other side we heard a huge THUMP and the caravan began to sway from side to side!! Rasmus managed to slow us down and move ever so slightly to the side of the road and come to a stop. 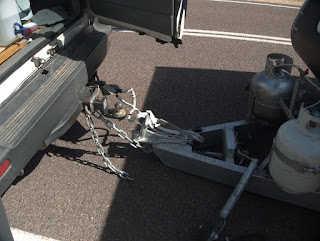 When we got out to have a look we saw that the caravan had jumped off the towbar!!! One of the chains between the car and the caravan was ground down and the caravan's nose was now sitting on the ground!!
Oh shit!
How were we going to fix this?
A car pulled up to see if he could help and then went to the top of the hill to direct traffic as we were taking up a lane and sitting halfway up the rise!
We got onto the RACV who kindly informed us that they only deal with mechanical breakdowns!! I took the phone from Rasmus, who is way too polite in these circumstances, and proceeded to lay an emotional guilt trip about 3 children and being stuck in the middle of no-where- she said she'd see what she could do.
As luck would have it a policeman came past and he began to direct the traffic in a very professional manner. Then another man stopped and then went back into the town to ask a friend of his who had a fork life to come out and help us. And the friend did come out to help.
The whole procedure, accident to driving off again took about 30mins!!! And restored my faith in the goodness of humankind :o)
It could have been a much worse incident with caravans tipping over or both chains breaking and...who knows what might have happened. We were very lucky and then we were blessed (yes, I said blessed) with some remarkable strangers who stopped to help.
As we were driving off the RACV rang back to say they had found someone to help. “Already done.” I said with a know-it-all grin.
The rest of the trip was without incident and we arrived in Port Lincoln safely. We were able to find a welder straight away, with the help of a lady from the Information Office, and 20 minutes and $60 later we were on our way to the camping-ground for the night.
Port Lincoln National Park.
Right on the beach.
Our kids found some other kids to play with within 2 minutes of our arrival and we never saw them again until dinner time :o)
Later, a scout group moved in across the way. It was cute to hear them still up and playing at 11.30 at night and know it's not my kids! All power to the scout leaders :o)
The boys saw a dolphin today!!! Kasper was only about 5 meters from it! They have come running back to get their wetsuits on so they can go swimming with them. What an adventure. Now if only I could get them to write about it their schooling would be covered too!

There is a lovely reef just off the rocks near us so the family, which we met on first arriving, have introduced us to snorkelling and the kids have now had their first experience and caught the bug. Ben was sooooo excited when he stuck his google wearing head in the water that he said he nearly had a heart attack. The colours of the coral and fish were right out of the books he's been reading. Lots of little Blennys came crowding around nibbling his hand and fingers.

Rasmus was so disappointed he couldn't go in- no wet suit and no way to wear his glasses under water. All was soon rectified on our first trip into Port Lincoln town when we visited the local surf shop. Goggles, flippers and wetsuits for all ($435 worth thank you very much!!!)

One slow day we decided to go for a 2.5km walk around the area where we were camping. Three minutes into it we spotted a monitor crossing our path. How cool!
We walked on listening to the sounds of the bush, the waves crashing onto the beach and Molly screaming that she wants to be the leader!! 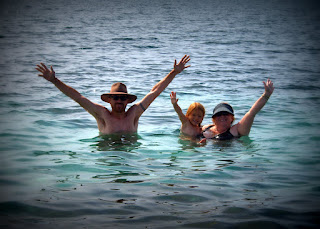 We eventually moved down from the track to the rocks at the water's edge for a closer look. The sea was so clear and inviting. It was a warm day and I was imagining stripping off and jumping in to the coolness. If only I had the courage. Unfortunately, we all came fully dressed with no bathers. We contented ourselves with just exploring the stuff around us.
But the water was so lovely. It was calling me to come in. There really was hardly anyone around. Just the odd boat which came past. But I had no bathers. Could I really pull off bra and undies as a bikini?? Me??
So, I did it!! Yes, me!!
And the water felt soooo good.
Then one by one each of my family spotted me, felt inspired and stripped off their gear too!
Naturally Rasmus did the full monty. I had to keep pleading with him to get in before a boat came past and he was arrested!
We did only manage to walk 2 km that day but it was worth it.
On leaving Port Lincoln I remembered that I never did get to see those dolphins. Rasmus claimed to have a photo and video of them-looks a little like the famous blurry Loch Ness photos if you ask me :o) 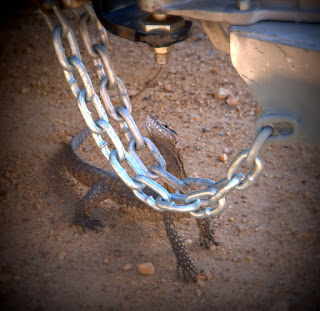 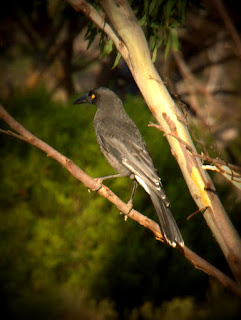 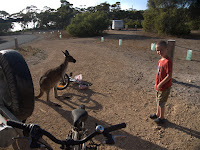 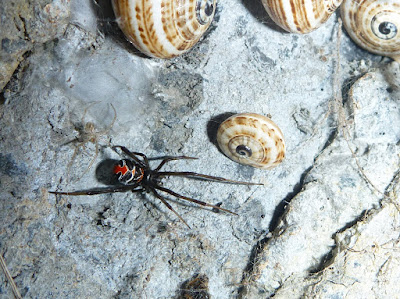 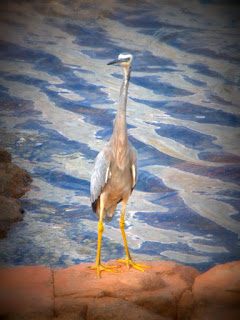 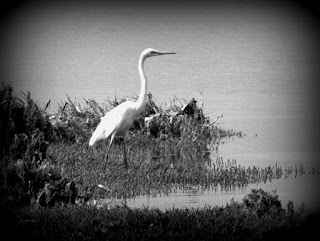 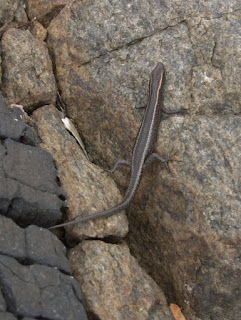 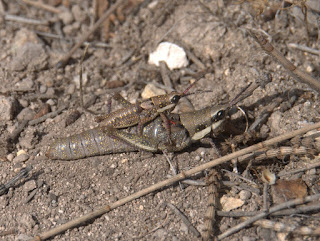