View Nullarbor in a larger map
The mythology and mystery which surrounds this stretch of our nation is well known and appreciated by most Australians. It was because of this that I started this part of our trip with much excitement.

I had initially envisioned endless kilometres of sand and isolation. Reminding Rasmus that we must have our car full of fuel and our tanks full with water in case we got lost or broke down and were stranded for days. My sister then informed me it was not like this at all and in fact you could see plenty of coast and they had even stopped to watch the whales when they were there. Cool, says I. I love whales. My new image was now of us driving along the coastline as we watched the ocean life frolicking in the waters.
Uuhhmmm......reality; it's often a disappointment.
Oh yes, it does goes past the coast- from time to time! When you do come close to the water it is a magical mix of green and blue and it goes on endlessly towards the horizon. It is a weird feeling to stand on the cliff reminding yourself that this is the edge of Australia and the next land was Antarctica! 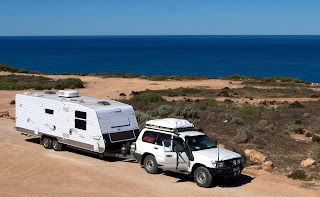 But I didn't see any whales! Granted it's not whale watching season but that logic doesn't fit into my fantasy!
The landscape along the Nullarbor was, for the most part, scratchy shrubs and gum trees. Not
the majestic kind which inspire songs about our swagmen or heroic horses dashing down cliff faces, but the uninspiring kind that have only the barest of foliage scattered on their scrawny brittle limbs. 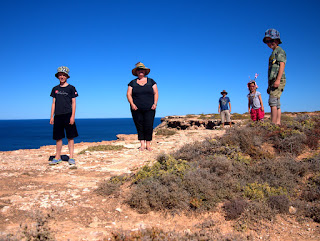 Not only have we not seen any whales but we have seen only the rarest sightings of any animal life at all!! Despite the often repeated signage to take care of the wombats, kangaroos and camels which may wander across your path.
Actually, the only wildlife we have seen were two tiny skinks spotted by Ben and a huge huntsman which Kasper saw when he went out for a wee at bed time. We have been so starved for fauna that we all trotted out in our pj's to see and photograph the rare sighting. 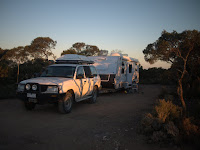 As for birds, no emus walking the plains or eagles soaring in the sky, crows is all we have managed. Lots of black crows picking at the carcasses on the side of the roads.
It hasn't been all bad. 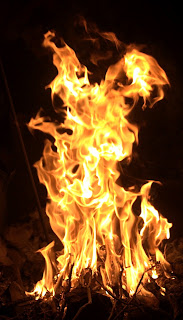 We have met some lovely people and one night shared a camp fire with 3 young german backpackers. We roasted marshmallows and cooked bread on sticks and chattered about nothing in particular. Molly fell asleep on my lap as we sat memorised by the flames, Rasmus pulled the billy out to boil water, Kasper drew pictures of the flames which leapt high into the air as one of the boys kept adding branches of dried leaves and Ben found a kindred spirit who shared his love of computer games which they talked about for ages. It was a good night.


Despite originally planning to brake the 1200 km trip into 6 days we only spent three nights on the Nullarbor
There is just nothing extra to see once you have pitched camp for the evening so you might as well keep driving.
Despite my less than enamoured experience driving the Nullarbor my last thought is of the golden trees of the last campground.
I first noticed them at the night viewing of Kasper's spider. Shining my torch I flashed upon the trunk of a gum tree and thought what a beautiful colour it was- like it had been sculptured from bronze.
In the morning the trunks glowed, like the sun had a spotlight on the them. Now I could see that there were dozens of them grouped throughout the landscape.
As we drove towards Norseman, the final leg of the Nullarbor journey, there were many more gum trees along the way which were shedding their bark to reveal their bronzed torsos. It was a pretty picture to end 1200 kms of “the treeless plain”.