30th April-3rd May
Pemberton
We continued our journey and began our movement westward towards a lovely wooded campground we had heard aboout and we were all very excited.
Ben was in a mushroom and fungi period of his life and was busting to find some in the nature. He had also commandeered his siblings to follow him in his pursuit and the forest where we would spend the next few days would be perfect hunting grounds.
As usual Rasmus had his GPS on to mark the spot.
Unfortunately, all did not go as planned and we found ourselves on yet another unplanned adventure.
We approached the turn off that the GPS suggested however, instead of our campground we found a big sign telling us that this was a one way street, and when I say street I mean dirt track!


Hmm??
Doing a U-turn we decided to try the road which we had passed a wee bit back. So off we went. The track was made of similar dirt as the one before so, feeling reasserted by that we continued on, and on, and on. Now, we were not only on the same dirt track but also in the middle of the forest!!!
With the sun beginning to set!!!
I was getting nervous. With no where to turn around we had to keep ploughing on and the track was still holding out for us....so far.
Eventually we came to a clearing where a house stood!!! Out in the middle of the forest! It felt a bit like we had stumbled onto Hansel and Gretel's place!
As it was getting latenand they had some paddocks surrounding their place I decided to ask them if we could stay the night and set off in the morning when the light was better. Unfortunately, again, no-one was home and we didn't feel right just staying without permission, so back into the forest we returned. This time with even less light. Have I mentioned that we are also pulling a 23ft and almost 3t caravan??
Hmm...
Finally arriving out the other end there was no way I was pulling out onto the main road searching for the hidden entrance to our campground. So, we pulled up along side (as opposed to the middle) of the forest, opposite the local cows, and spent a chilly night there.
It was quite lovely waking up, donning hats and jackets and drinking hot tea with the cows as neighbours. A far cry from some of the dusty vistas we had had up till now.
When we had eaten our warm porridge and the kids had seen a few mushies growing next to the giant trees we went to try our luck again with the evasive campground entrance.
Embarrassingly we found the entrance about 5 meters past the original one way track!!!
B*@%&y GPS.
Luckily, the camp was serenely beautiful so my bad feelings faded quickly. The campground was set in a sunny opening surrounded by lots and lots of tall and grand trees. There were fire pits which put a smile on Rasmus' face and many places for the kids to explore on the look out for their fungi. 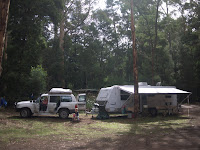 We didn't leave the place very often. It was just so nice to be amongst all that nature. Occasionally we went for a drive and ended up in the small town. They had a play ground and a second hand book shop which the kids liked to visit. The owner had also agreed to look over the books the kids had collected along the way from op-shops and to their delight received $2 per book!! They each received $6 each and for the first time in their lives were allowed to go to the supermarket and buy some treats with their money. They had originally wanted to buy toys or books but Rasmus didn't want any extra weight so junk food was the compromised option.
They had so much fun trying to decide what to buy. Kasper, my sensitive little man, nearly had a nervous breakdown trying to pick just the right items!

Regrettably, it will be the last time for a while that they will be allowed such extravagance as most of the loot was eaten in half a day instead of the “little bit each day” that I had requested and sore tummies soon followed. Oh well, it was fun while it lasted.


Another trip out took us to the famous Glouschester tree. Set in the National Park a 60 m tree had spikes banged into its trunk all the way to the top. Originally these foot holdings were used for people to climb in order to spot fires in the area now it was only tourists who made the ascent in search of adventour, amazing views and a fantastic photo opportunity.


Naturally, I was not keen to try the climb and luckily for me my out was bad foot wear-no things allowed. My job was to stay on the ground and tell the children 150 times that no, they were not permited to go up. Eventually I yeilded, after much nagging, and allowed them to go part way. 60 m is a really long way!! My daring hubby, never saying no to the opportunity to capture the perfect snap, went all the way. And spent an awful long time at the top getting those snaps!

Well worth the effort I think :o)

Each night the temperature dropped low and the campfire was much appreciated. Rasmus had the billy on constantly boiling water for cups of tea and hot water bottles. Marshmallows were singed and we even had a sing-a-long one night. We really did!!
Rasmus and Ben made dinner one night . A lovely mushroom pasta with the main ingredient plucked from the forest! It was a real buzz to do that; cook what the kids had found.
The weather had been quite nice while we had been in the woodlands but we knew some rain was coming so it was time to move on.
One of the places we wanted to visit before we headed out of the area was the Giants Valley where we experienced a couple of amazing happenings.

Read on to hear about it from our free lance reporter......… 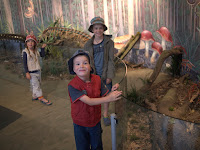 When we arrived it was very damp. It was a nice forest I was hoping to find some fungi as well as looking at the trees. 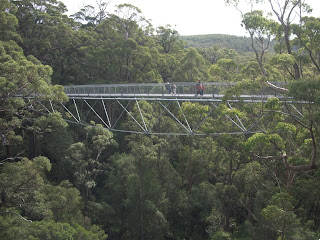 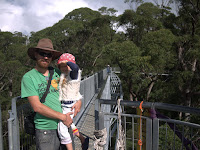 There was this nature place but I don't know what it was. We were in there for about 15 mins. So then when we were actually on the bridge (finally) dad was not helping by rocking on the bridge making Molly & Kasper snuggle up with mum (making it impossible for me to get past) it took about 5 mins for the rocking to stop. At the same time Mum had motion sickness.


When we were half way we saw a bird. Apparently it was a Whistling bird. I even saw a fungus on the ground (I was 30m above the ground) and it's called a Karri Cushion fungi. 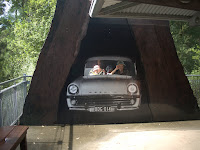 When we were off the bridge we went to the gift shop. We had a look around and left (without loosing a single penny). So, we went on the ''the ancient tree walk''. All those giant trees are called Tingle trees, man i forget that name a lot. They have a hollow base which is sometimes so big a car can drive through it.

I forgot to bring my camera so dad lent me his so now he's got a dozen fungi photos on his SD card! 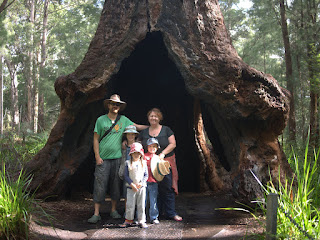 The oldest tree there was 400 yeas old (on the walk). When we finished the walk it started to rain and mum needed to go to the toilet (No secrets here!). We did not want to wait for her because it was bucketing so we ran like mad men to the car. It took dad ages to open the car! Mean while me and Kasper were getting drenched (literally). So, we got in the car and waited for mum.
To make a long story short, we drove off. 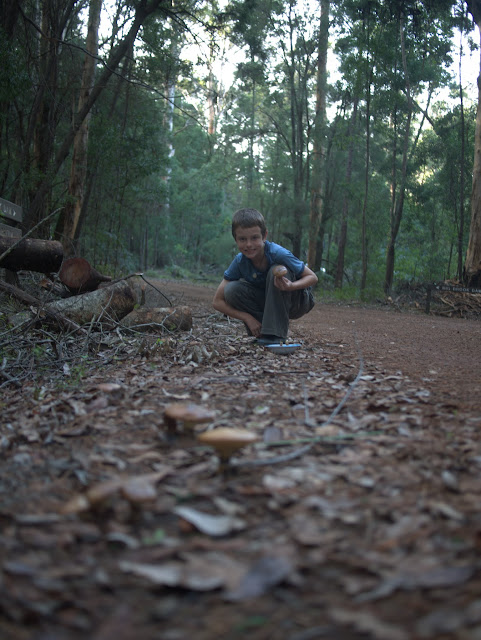 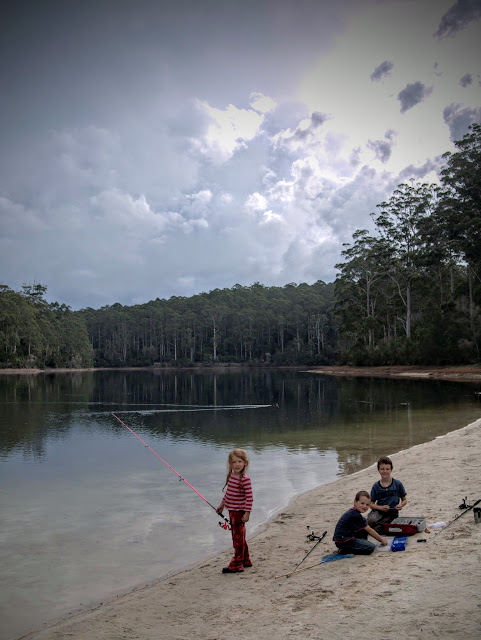 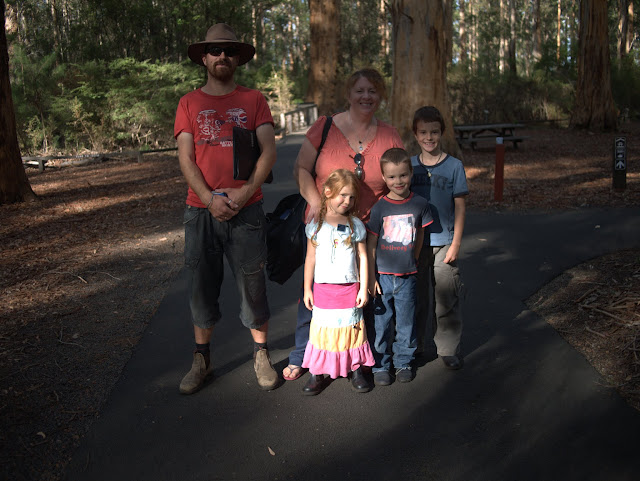 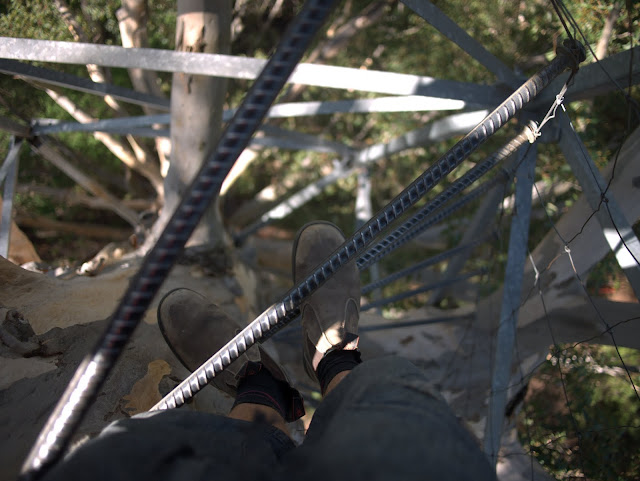