Before and After Geraldton 20 - 21st May 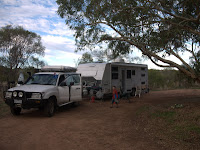 It was still only early in the afternoon and still plenty of driving time left but we had a lot to do in the next town and wanted the whole day to do it in so we found a lovely pull over spot and called it home for the night.
There was already a few vans there which was odd being just after lunch. We spoke to one guy who explained he was having car problems; that explains why he was here. Rather than asked the others I decided to make up stories about them instead. My brain needed some fantasy time after sitting in the car all morning.
The kids, on the other hand, spent their time collecting Paddy melons. We had seen the round objects in the fields for ages now, growing next to the sheep. The sheep however, did not seem interested at all in them so we were really curious about what they were.
They looked like watermelons on the outside but were much smaller so when the kids had a few we decided to open one up.
BANG. BANG. SMASH!!!
That job done we agreed they also smelt like watermelon. Putting on my home schooling hat, we hypothosised that they were perhaps unripe watermelons. It wasn't till we met some people later that we were told that they were actually called Paddy Melons and wouldn't grow bigger than what they were.

21st May
Driving into Geraldton we headed straight to the Visitors's Center. We needed some stuff and we needed to know where to get it!
As we looked around the place and asked questions of the sales assistant the kids, as is their usual habit, perused the gift shop. My darling Molly spotted the basket of shells and asked if she could buy one!
Guess what I said? No!

Is she out of her mind? We are hitting every beach from Melbourne to Upper Backofnowhere and back again and she wants to BUY a shell!

I did feel bad that they only cost 10c each, but it's the principle. Buying shells indeed!
Needless to say there were tears, loud ones :o(
In an attempt to distract her we went next door to the local Old Gaol. Obviously it wasn't used as a jail any more but we were surprised that each cell had been reprised as craft shops! How entrepreneurial. It stopped her tears and luckily there was nothing else in the shops that caught her eye.
We then continued our tour of the town and arrived at the Geraldton Museum. It was quite fascinating here. They had sections on the local indigenous people, local flora & fauna, a huge fish tank, which the boys especially spent much of their time at taking photos and video of the wriggly aquatic vertebrate (warning: thesaurus being used). I found the section on maritime disasters most fascinating; must be the ghoul in me.
After looking at the beautiful photographic gallery they also had we found Molly in the kid's playroom playing dress-ups! Uncultured waif!
We ate hot chips down at the beach for lunch and then for the rest of the day we traversed the town doing our jobs.
It was getting late in the afternoon by the time we were filling up with fuel and driving at dusk you run the risk of encountering our skippy friends on the roads. As I was paying at the counter I asked the sales lady did she know of any free camp spots close by? She said no, and then I casual said that I wish we could just pull up over there. Pointing to a vacant lot behind. She answered that if we wanted we could park in front of her house. She lived in a cul de sac full of big empty blocks just across the road from where we were now. Wow! Very Cool! 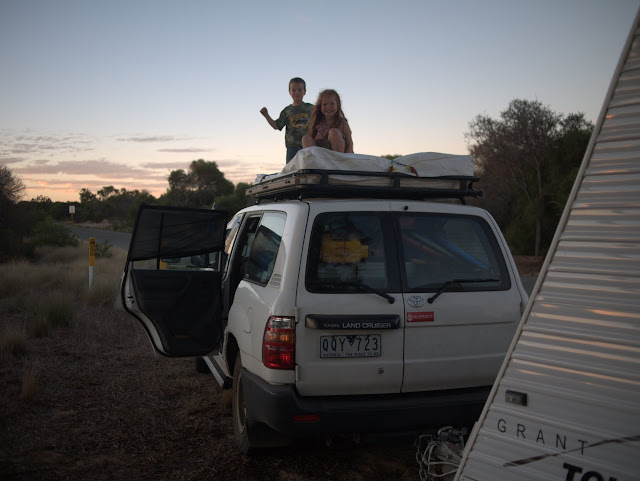 So, I said yes please and that's where we spent the night.