The Pinnacles May 15th 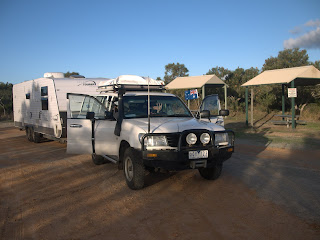 Cool.
All organised.
Everything was running smoothly and to plan until we arrived at the predetermined camping-spot. In between writing the Camps Book and us arriving to stay the night they had changed to conditions and we were no longer permitted to sleep over night!
Bugger!
Ok. Plan B.
We drove to the next rest stop. O Oh! Same problem.
What to do now? We could have driven to the local caravan park but it was already late in the afternoon and we hate to pay $50 just to sleep and leave. We like to get our money's worth out of the facilities and arrive about 10am :o)


Well, we decided to go back to the first rest stop and sneak an illegal sleep!!!
I am telling you it is hard to hide a caravan the size that we have but that's what we were going to do!
We covered the windows so that no light escaped and went to bed hoping that we weren't discovered. Rasmus slept like a baby but I, have a more sensitive moral demeanor, woke up every time a car drove past and thought was this the Ranger coming to ask us what did we think we were doing???
Pinnacles morning of 15th May
However, early morning came without us being detected and we quickly got into the car to drive on to the next leg in our mission.
It was still dusk as we arrived at the Pinnacles carpark so we were excited. As we drove on, following the directions to the spectacle itself Kasper says, “Oh, that sign says no caravans.”
Sweet Kasper we said, thanks for the heads up but they mean you can't park in that park of the carpark with a van.
So we continued down a track that pointed to sightseeing. The track turned a bit sandy but we began to pass the beginnings of the rocky fingers of the Pinnacles so we knew we were on the right path.
Until......we can't take our 23ft appendage down THAT road!!! Whoops! Maybe Sweet Kasper had been right after all!
With no where to turn around we now had to reverse a couple of 100 meters back up the path! Hope nobody else wanted to see the sunrise!
With the caravan all parked in it's proper spot we raced back to the rocks just in time to see the sun coming up! Phew!
We spent the next couple of hours wandering around the alien landscape, marveling at way nature does things. Photos we taken from every conceivable angle and even a few that hadn't been invented!!
Afterwards we returned to the van for some well earned brekky.
Other cars had been coming and going by this stage so we decided to release the van and try our luck on the sightseeing track again.
We found sand dunes that the kids spent ages climbing up and rolling down. They made their own mini versions of the Pinnacles in sand form and I'm sure did other equally kid style activities. Unfortunately I never saw them as I fell asleep! Let's hope Rasmus was being more observant!
With our fill of the Pinnacles rocky fingers and the sun getting hotter we went inside to take a look at the informative visitors center which told us about the animals, environment and locals of the area.
I bought a badge and then we were off. 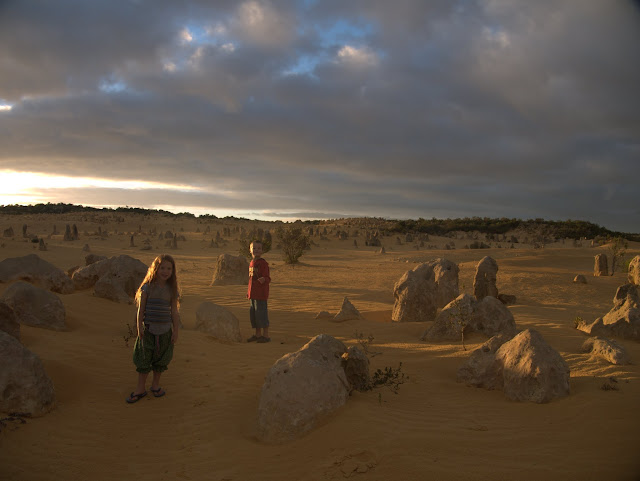 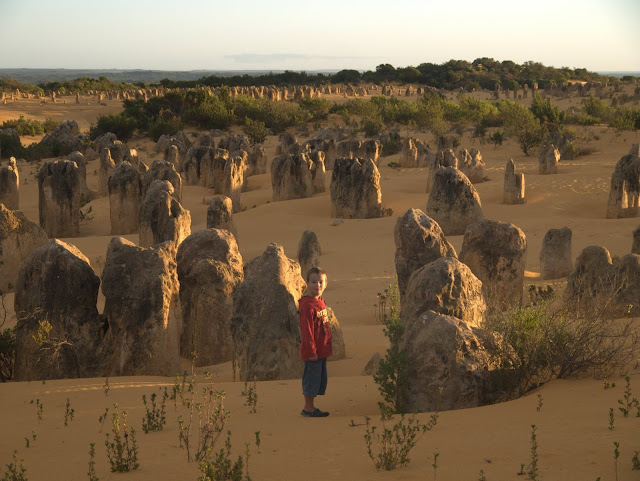