We had found a lovely camping ground via the internet and were on our way to seek it out. Before that though we did the usual top up (of fuel, food and water) in town.
With that done we went to the camp site.
Driving along the main road we spotted the turn off.
Hmm....road seems a little unmade for a well used campground but we continued.
Coming to a t-intersection we used the GPS to guide us as there was no sign post. Again...Hmmm...but still we continued.
The road was no longer a road but a sandy track.

Now starting to get a little concerned.
We eventually come to a rather alarming sandy hill, rather like a dune. Now we stopped.
Rasmus got out to take a look at the top of the hill- it just better be the right direction before we attempt to take our 23ft appendage up a deeply sandy and hilly track.
The re-con mission suggested a big NO.
Oh god, what to do now. We have to try and turn around and go back to the t-intersection and go the other way. Bloody GPS.
We did it!!
Actually I did it while Rasmus directed (he thinks I can't direct! Rude man!!)
Ok, attempt #2.
So far, so good.
Oh $HlT!!! The road/track has become a 4WD training course!! With vegetation thickly lining the track and touching the car. There is absolutely no room to do anything except go forward. I closed my eyes for most of the trip waiting for the nightmare to end. Hoping that it brought us to a clearing.
After some kms of bush bashing guess what??? We came to an unsealed but beautifully smooth
road. It was the road we were supposed to come down!! Apparently we had missed the correct turn off and made our way cross country style! Well we do like an adventure...NOT.
Finally arriving we found our little corner of the campground and set up for our stay.
Now pass me the wine bottle!

In the morning we had a good look around and while we looked we found a family we had met at previous campgrounds. They have a little girl so Molly was organised for play dates!!
The campground is right next to a really lovely beach which we planed to utilise a lot during our stay. And when I say “we” I mean everybody but me coz guess what??? I had HOMEWORK.
Thus, our days were spent snorkeling, eating, playing and studying. Some of us doing only some of the things on the list.
Every day we filled the solar bags with water and set them out to heat up. When the days swimming was complete we hung the bags in a nearby tree and we all got lovely warm showers and nice clean clothes. It felt good to know the kids weren't relying on their sea water dips as their only source of cleanliness.
Rasmus had found a great part of the beach which was nice and calm and the water was clear enough for some snorkeling.
On one afternoon Kasper returned telling me about a seal he had seen. “How cool” says I. Kasper went on to tell me that the seal thought he was her baby as he had his flippers on. I asked him was he very close to it and he replied simply “Oh, about from here to there.” Very helpful thought and went back to my work. 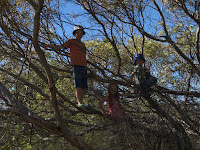 Later in the day somebody asked me if Kasper told me how he swam with a seal? What!! The seal actually came up to him and Rasmus and swam around and between them!! I'm thinking Kasper played that down a bit. What has to happen to impress that kid?
On our last day I decided to down pencils and check out the scene down at the beach. I even tried my hand at a bit of snorkeling too and they are right, it is the coolest! The under water neighborhood was so pretty; lots of different seaweeds and even the odd fish. It wasn't the Barrier Reef but it is always special to see our fishy friends in their natural habitats :o)