Arriving late in the morning we waited an hour or so till some one left so that we could pinch their spot. As there are only 15 camping places and not many of them were suitable for the Beast, which was our home...It was worth the wait.
Sitting right next to a beautiful beach under an endless blue sky is a rather nice way to spend one's day I think. After a quick set up we went down to the water and spent some time frolicking in the suds.
On awakening on the the second day it was so windy we couldn't keep the fridge gas alight and the awning was about to take off on its own. The neighbours were also having trouble so they had decided to pack up and leave. No use staying and spoiling a fridge full of food. After several attempts to keep the flame lit we thought that perhaps we should move on too. The beach isn't much fun when it is whipping your legs with sand. So, we half packed up the van and thought about leaving.

We hadn't had breakfast yet so there was going to be no rush. Gotta pace yourself even in an unwelcome situation!
We said goodbye to the next door people and went inside to eat. After we did a bit of tidying up and thought we had better get on with the rest of the pack down. On opening the door we found a calmness had replaced the restlessness of the morning. Pack down ceased and set up began again.
We felt a bit sorry for the people who had jumped the post and moved on too quickly. If only they had been as lazy as us they could have enjoyed the area for a few more days.


Later on we met up with other 2 families we had been bumping into along our journey up the coast. The kids now had friends to play with, sunny weather and a beautiful beach to play in. What more can a kid ask for? Don't worry they thought of other things...more computer/DSI time, TV, food. The list goes on and on with kids doesn't it!
But for now they were happy.
We also met a new family, the Marshes from Newcastle. Two boys and a girl in the same birth order as our own family's. Must be fate :o)
Internet connection was a bit slow at the camping ground which was not a lot of help as I was doing my assignment. Especially at night when the whole system seemed to shut down. Perhaps Telstra only worked 9-5 out here? 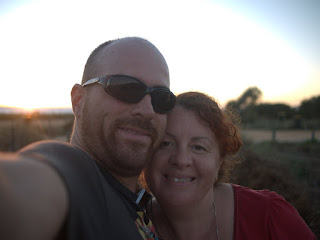 They had built a tall, wooden structure at the rear of the grounds as a viewing platform for the amazing sunsets which occurred each night. Watching the sun go down into the water is a particularly special event-especially for us eastern dwellers. Each evening campers would meet up in the tower with a beer or wine in hand and say good bye to the day. It was a lovely communal area and lots of chatting and laughing took place.
As it was the highest place in the area it was also the best spot for telephone and internet connections. Consequently, many of us spent our time up there with our electronic bits and bobs searching for that sweet spot which would connect us to the rest of the world.
The beach took up the majority of our time here. Although snorkeling was not at its optimum with the waters being too murky, they had fun doing what you do on the beach. Swimming, sand stuff and lying around not doing much at all.