Myalup Rest Stop
On the way to Perth we made a late stop in the middle of a forest which was by the hwy. It was a bit soggy and actually a bit creepy too.
Full of pine trees the forest didn't let in much light so it looked like a place a misadventure might happen. Like in one of the Danish crime books I've been reading. Perhaps I should stop reading those kind of book until we have finished camping in secluded, out-of-the-way places.
It was also a bit noisy, being next to the hwy and all but we got through the night.
In the morning we were still unsure where we would be camping so we got onto the internet bright and early to do the ring around.
At last we found something that fell within our budget. They told us we needed to be there by 10am as they close up shop till 4 in the afternoon.
“Ok” says I, “we'll be there”.
It was 9am and we needed to hit some asphalt.

8th & 9th May
Perth
Advent Caravan Park
Despite being 15 mins late the caravan park was still open and we were shown to our spot. Lovely. Lots of grass and clean toilets. Just how I like it.
The park is actually owned by the 7th Day Adventists and is used for camps. So they were very well set up for large groups. Long rows of toilets and showers meant that nobody would have to wait long in peak times. As it was there weren't that many of us so we could really spread ourselves out.
It was still early after we had finished the unpacking so we decided a trip into town was the go.

As we weren't that far from the CBD we caught a bus thinking that would be the best course for us. Positive #1 was that the bus stop was just outside the caravan park. Positive #2 was that we didn't have to think about where to park the car and pay for parking fees.
On the flip side the 20km trip took over an hour and cost us $45!!!! No complaining about public transport prices in Melbourne anymore! At least we were being environmentally friendly :o)
Once in town we started to make our way towards the main shopping district.

Like our Bourke Street in Melbourne Perth also had their own version called Hay Street, although it was a bit shorter.
We browsed the shops dreaming about what we might buy when we have an income again. The kids asked, in almost every shop we went into, to buy something. It is always nice as a parent to make your kids cry with by saying “no” at every opportunity don't you think :o(
In our defense we were trying to give lessons in window shopping, a very important skill for the monitory challenged.
We did give in at the lolly shop. Not really sporting to window shop in a lolly place is it!
There was also the instance when Ben wanted to buy a DS game. Rasmus and I didn't want to just spend $31 as a treat (being monitory challenged and all) so decided to get him the game for his birthday as a surprise. We shuffled the kids out of the shop, with Ben almost in tears, and tried to get them as far from the place as possible so that I could sneak back to buy it. The mission was completed with success, I think. I'll let you know in August when we give it to him at his birthday.
Later the kids and I settled ourselves in the town square to have lunch while Rasmus went to an appointment at Mac Cafe. It is an Apple place as we were having problems with our laptop making too much noise. 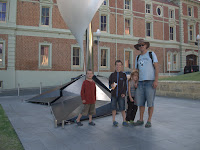 Back at the town square however, we were trying to eat our lunch but failing miserably. I had brought some bread with us which I had bought some place but we couldn't eat it. It was quite dry and fell apart as we tried to take a bite. All we were left with at the end was a pile of crumbs around our feet and empty tummys! I promised we would get something else when Dad returned from his meeting. The kids were happy with this and went on to spend their time running around the lawned area annoying the other lunch timers.
When Rasmus returned he told us the Apple people had said that nothing was wrong with the laptop! Huh?? Was it supposed to be making all those noises? Dopey Apple people.
To get over the disappointment we found another Mac Cafe but ordered fries and cheese burgers at this one. Num num...yum.
To add a silver lining to our afternoon Ben found a bus ticket!! Yah! Only $35 for the ride home!
So, when we had finished our tour of Perth's main street we took the bus home again. I jumped off a bit early to go to the shops, Rasmus went all the way with the kids and came later to pick me up with all our fresh goodies.
In the morning there was much discussion regarding what we would be doing. However, when I say “we” I mean Rasmus and our offspring. I had another assignment looming so my time would be spent tucked away in the van-lucky me heh!
Eventually, the decision was made and with a yummier lunch than yesterday they were all packed ready to go. Even the car was getting a trip-we learnt our lesson about that too.

For the inside scoop about what happened while I was M.I.A. I will pass you over to our resident junior blogger.....

When mum said we HAD to go to SciTec i was NOT! happy.
But when we got there I changed my mind about it.
When we were there it was really cool.
There were fish in an aquarium, chicks scratching around in hay but I think there was one was dud egg.
A glass tank filled with water and 2 ping pong balls. There was one lever outside the tank which you pulled and made a Hurricane change size and shape.

There was some fried ice that was relly cool-I could make rings of steam. The water was cold even though it was steaming!
There was a ball pit (which I all most drowned myself in even though that was not allowed). I think thee was a cloneing ball machine coz if you put one ball in there even more would come out-or sometimes not! The boat in the ball pit crushed me like a bug. 2 minutes later someone found me-finally!
We saw a seat which had a rope attached to it. You sat on the seat and pulled the rope which made you rise up! If you let go of the rope you went down, but slowly.
I made a kind of doodle bug picture. A table was attached to the roof by wires. A pole attached to the wall lend over the table and had a pen attached to it. You placed you paper on the table under the pen and when you pushed the table it would swing and the pen would draw a picture on your paper. But if you touched the table after you swung it it would stuff up the picture.
There were projectors that would change if you did a certain thing to it. For example, one of them shone onto the ground and made an image of a lawn. If you stood on it flowers would grow under your feet!
Another one shone onto a tent a picture of a shed and there were 4 different types of fire exinguishers in front of you. When you clicked go the a fire would start some where in the shed. Maybe on oil or paper or pastic or metal. Then you had to choose one of the extinguishers and try to choose the right fluid to put out the type of fire that had started. A red laser told you if you were you were going to aim. I liked the powder the best.
There were so many things I can't write about them all- you have to visit it.
(Location will be on the map.)
(which is on our blog :o) )