Did you know that it is very difficult to find free camping in the Margaret River area? Luckily for us we did find a great campground on a working sheep station. It wasn't free but it was so lovely and there with plenty of grass and lots of sheep.

Did you also know that sheep can sneeze?
On the property they had a big camp kitchen which proved useful as the weather was not as kind to us as it could off been and the kids used the big tables to sit at and do lots of drawing.
Despite the weather we liked it here so much we decided to stay an extra night.
One of the three nights we had here was spent tipping our fridge upside down, and that is not easy!!
Let me explain :o)
We had been been having trouble with the fridge and could not get it to work with either the gas or on power. All our food had been transferred to the esky and I was cooking like a demon before our supplies got spoilt. We had called the dealer and the plan was to take it to the next town, some hours away, where they dealt with gas fridges- but not caravans. We had to remove the fridge and take only that to them. As we found out later though, the fridge does not fit through the door. Hmm...
By fortuity, when we were at an ice-creamery I think, we had a chat with our lovely friend Dan Ellis -Hi Dan- and told him about our problem fridge, he got onto his friends and they suggested pulling the fridge out and turing it upside to move the coolant around. Well, we had to move it out anyway so it was worth a try, and it might actually save us some money and some time. So that night that's what we did. And it worked! Thanks again Dan :o)
So that meant we could get on with the serious business of sight seeing. And in Margaret River that meant food tasting!
On our first foray we wandered the streets soaking up the atmosphere. It was a Saturday so the streets were busy with people doing the same. Lots of cafes and specialised shops filled the shopping area which gave it a low-key cosmopolitan feel (Is that possible?). Although most of the boutiques were way to expensive for our budget it was fun to look. I even got my hands on some rye kernels at the local organic shop which I had been looking for all over Australia to make some Danish rye bread. The recipe calls for them to be broken so the shop keeper said she could pop them in her whizz bang Thermomix. I was so excited.
Guess what?
That machine actually can't do everything after all :o(
It could only bring the kernels to flour which was no good to me. Oh well, back to the drawing board.
Later, during our roving, the kids found a library and spent some time there. The weather wasn't super great so it was nice to get out of the cold for a while.
Lucky for us our next day was, although cool, sunny so we decided to try out the ice-creamery which we were told was of an excellent standard. 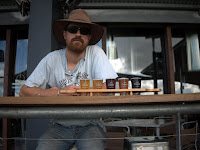 It was a really cool place with a great playground and wooden cows which you could practice milking by pouring a bucket of water into its bum and pumping it out again via its equally man made udders.

The ice-cream shop itself lived up to the hype and we all had a huge problem making a decision from the flavours which had been pipped into mountains of creamy deliciousness.
I eventually went for rum & raisin much to Rasmus disappointment as he doesn't like that kind so wouldn't taste it.
On the way home we stopped off at a road side shed offering organic vegies but unfortunately there was nothing I could use.
Further down the road we saw a sign for a brewery and thought we could all see how to make beer – very educational of course- but we were again fooled and it was merely a pub. A very fancy pub I might say with a huge outdoor playground and lots of lovely wooden bench seats and bar stools lining the tables. We decided not to waste our drive there and sat down to try their sample plate of 6 different beers while the kids had a play. Rasmus scored well coz I only liked the first two so he got to finish the rest, and then took the passenger's seat home!
The last day in Margaret river and on the way out of town we visited several different shops.
The cheese place was great and we got to try LOTS of different cheeses and yoghurt. Kasper had so much of one particular kind I felt obliged to buy a wedge of it!
Then there was the chocolate shop :o)
On entering we saw huge bowls of milk, white and dark chocolate buds which we filled our palms with and nibbled on as we perused the other treats. They had a big window to view the huge vats of melted chocolate being stirred and tipped from one pot to another which naturally made our mouths water. The kids bought one truffle each and on the way out we tested the bowls of chocolate buds again, just to be sure they were still of the same high standard ;o)


The last places we visited was an olive orchard. In the front room of the store they had an open plan workshop where the soap was produced.  You could see all the different stages of development by watching them at the different work stations. The shop itself had shelves of lotions, scrubs and cremes which you could test. We did hand scrubs and moisturising until we had no more skin to exfoliate. To wash off the beautiful smelling potions they had an amazing plate of granite which the water splashed down onto from a tap and then seemed to just melt away. It was quite an ingenious design.
In the second room of the shop was the olive oil and other food stuff. Here you could dip little pieces of bread into the various flavours of oil or seed mixtures which they also sold. In addition to these there were vinegars, dips, whole marinated olives and all sorts of yummy things to try.
Needless to say, after all our tasting during the day, we didn't want to eat lunch.
Ahh, it's a nice way to go.
Posted by Unknown at 9:39 PM